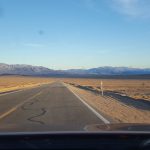 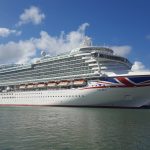 In 2011 i was invited on the hen weekend of a good friend. This was going to be a two night ‘taster’ cruise. I was instantly filled with horror!

A million thoughts went through my head, surely cruises are just for older people, aren’t they? Will I feel trapped being on board a boat for two days? Last time I went on a ferry I was horribly sick, this is bound to happen again. What clothes do you wear on a cruise? Because she was such a close friend I decided I would pay my money and try to enjoy the weekend.

So off I went to Southampton, feeling very apprehensive.

Pulling into the Ocean Terminal I was wowed at the size of the ship, it was massive (I have since learnt that this ship is pretty small these days). It was not the fancy ferry I had imagined.

Once on board I was completely shocked by the opulence of the decor and design. Although fairly small, the cabins were like hotel rooms, not dorms! I spent the next two nights aboard Oceana enjoying the fabulous food, entertainment and a cocktail or two!

Yes this cruise was a bit of a `booze cruise’ filled with hen parties and large groups celebrating big birthdays. However, what I learnt from my time onboard Oceana was that any age can cruise, I didn’t feel trapped, I wasn’t sea sick and I never once got bored being `stuck on a ship’.

This got my thinking about what it would be like to do a longer cruise, so five months later off I went again. This time it was a ten night cruise around the Greek Islands sailing from Rome, with my husband. It was this cruise that really won me over to cruising. We saw so many different places and experienced different things that I finally understood why people cruise. Yes you can see all these place by flying there but instead of spending time in airports and sitting on planes, we were eating in fabulous restaurants, watching great entertainment and sleeping in a very comfortable full sized bed whilst traveling to our next destination.

Since then we have taken many cruises, long and short with P&O, Celebrity and Norwegian Cruise Lines (NCL). Each cruise line has a different approach, some have formal dress nights with set dinning times and others you are free to wear what you want and eat when you want. If you want a quiet time there are the smaller ships available. If like me you want to pack as much into a holiday as possible, there are the mega ships with ice skating, surfing, ten pin bowling, night clubs, West End shows, water parks and outdoor cinema screens. There really is something out there to suit everyone! 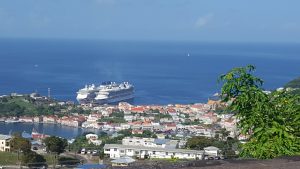 Does this mean all my holidays are spent floating around the ocean sipping cocktails? Absolutely not, although I love a cruise, there is still so much to see from a land-based holiday. With the best will in the world you can’t see all that a place has to offer in the day you generally get in port, but it is a fantastic way to see if you fancy returning for longer!

So, back to my original question, which is best, a cruise or a land based holiday? For me its pretty much a tie, I love driving around a new place exploring and seeing new things but I also love how relaxing a cruise can be. The lesson I have learnt is not to knock it until you have tried it!